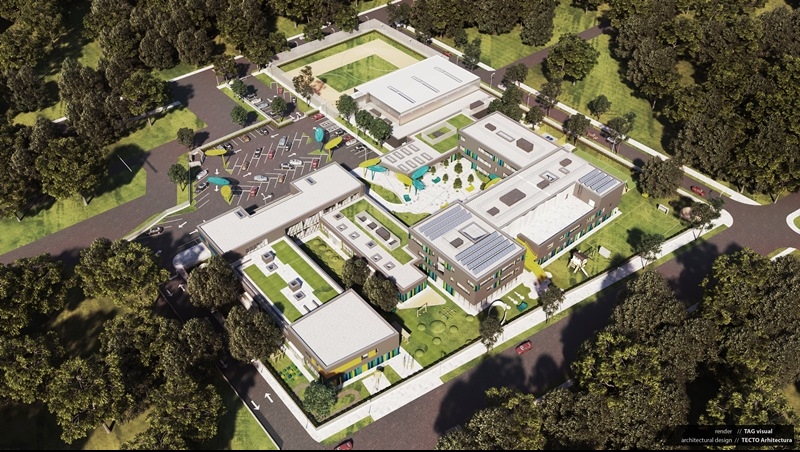 From the very beginning, REC was involved in organizing the selection of architectural plans, in coordinating and supervising the design engineering, organizing the selection of the builders, but also coordinating and supervising the execution of the works. The investment in the construction of the first phase of the DSBU campus amounts to 10 million euros out of the total investment of 20 million euros required to carry out the entire project.

„Beyond its usual project management activity, REC was also involved in optimizing the technical solutions, financing the project and finding sponsors for DSBU. Consulting, design and project management of school projects form a very important area of expertise, which REC has been carrying out in Germany for many years. We are happy to implement the same standards in Romania, especially in a unique project such as the new Deutsche Schule Bucharest campus, "said Rafat Kamal, REC partner.

"Our promise was to start the 2020-2021 school year in a new and also modern building. We culminate in being one of the most modern schools in Europe, and in September we can enjoy all the facilities that this school brings us. For this we thank all the partners who supported us, especially REC, who stood by us from the very beginning "- said Friederike Gribkowsky, chairman of the board of DSBU.

The Deutsche Schule Bucharest campus is being built in two stages, on a land area of 21,300 sqm, donated by Petrom, and a built-up area of 10,950 sqm, located in the northern part of Bucharest, next to another large-scale project also designed and coordinated by REC, namely Petrom City. The new school will be able to accommodate 500 students and will integrate all forms of pre-university education. The campus has a physics laboratory, a chemistry laboratory, an IT laboratory equipped at very high standards, a library, spacious large classrooms, an indoor sports holl and three outdoor sports fields, an athletics track, its own canteen, an ultramodern auditorium for festivities. The construction activity also continued during the government's imposed emergency period, with respect to the specific rules, and Deutsche Schule Bucharest can be inaugurated in September 2020.

About Deutsche Schule Bukarest
DSBU is the only school in Romania that fully follows the German curriculum, is accredited by the German Ministry of Foreign Affairs and is a member of the World Federation of German Schools Abroad. DSBU attends the curriculum of the state of Baden-Württemberg, and the courses are conducted in German. The whole process benefits from the support of the embassies of Germany, Austria and Switzerland, as well as of partners such as Petrom City, BCR and Țiriac Holding.

About REC Partners GmbH
REC Partners GmbH is an internationally recognized company with expertise in consulting, design and project management for commercial buildings. So far, the company has delivered projects of over 15 million square meters with its own team of over 80 engineers, architects and economists with offices in Berlin, Bochum, Frankfurt am Main, Hamburg, Cologne and Bucharest. In Romania, the REC portfolio includes clients such as BCR ERSTE BANK, PETROM, BNP PARIBAS, CA IMMO, SIMMO, VASTINT, SKANSKA, GLL, MCKINSEY.